Seventh grade students considered the idea of “the vignette”. Using their written vignettes from English class as a starting point each student created a symbolic pictorial partner through experimentation with watercolor and acrylic paint. 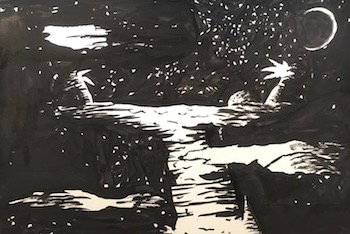 My Meaningful Moment by Adrian

I remember hearing about the “surprise” that was going to happen just as school got out for summer. I had no idea what it was going to be: maybe a new TV or… well, anything. A week from summer break I was getting excited. I then knew it would be a trip, but to where? I got on the plane that would be flying for over 10 hours to a city named Doha in Saudi Arabia. I’d never been there before. However we weren’t stopping there; we were going to go to The Maldives which are indeed another 9 hour flight. After the long flight and seeing the colors of the sky change rapidly. We were at another city on a small Island, - the airport alone taking up half of the city. Our journey was still not at an end there was one more plane to take. This one however was only 1 hour unlike the others. I was very tired and worn out by then. This plane ride was in a small Seaplane. We had to wear headphones because the propellers were extremely loud. In the sky you could see all the beautiful islands littered below. They all had amazing turquoise beaches. After the surprisingly smooth landing we got off and boy, it sure was breathtaking. All the exotic fruits and animals, the corals and fish and especially the wonderful sunset and the amazing starry nights you could see all the stars. With the moonlight reflecting off the clouds making them look like silver, It was as if it came out of a dream. 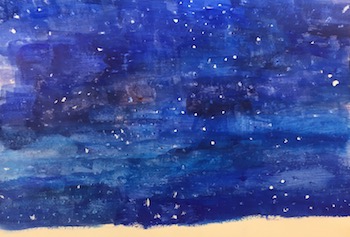 We are made of stardust from many eons ago. And we will live our petty lives out on this petty planet. We will hear sad and happy news and live through crisis we didn’t know we could survive. Some of us will achieve momentary fame, and will achieve great accomplishments for our small race. And then we will all die. We’ll be buried or burned to ashes, left to be a fraction of whom we were. The world around us will continue. The one pale blue dot in our endless universe where we’ve lived out every fight and moment of sorrow and horror of our lives; the dot where we have witnessed genocide and evil beyond our small mind’s capability of understanding. And 1 billion years from now our sun will swallow our planet, and our dot will burn away, our bodies along with it. We will become stardust once more till the end of our universe.

When so much is unknown about ourselves and our world it is comforting to know I will become stardust, just as I started. 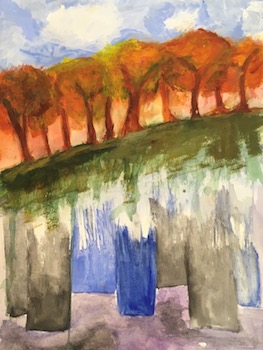 A single autumnal leaf drifted down brushing lightly against my windowpane. Down below a colony of trees seemed to sing out in harmony swaying back in forth to an imaginary beat. The grey concrete path was littered with colors like the pages of a kid’s sketchbook. The sky a beautiful yet scary shade of light grey, the color of an African elephant/ It was a beautiful sight.

The day was overcast and cloudy. (Wonderful weather, perfect for rain). A bright green lawn stood out from between the sunshine colors of the leaves. It held pumpkins, each dotted further from the others like a “connect the dot” sheet left blank. Everything seemed so planned, so boring, like a stock photo that you could easily find by searching fall scene desktop wallpaper, and that’s not to say it wasn’t pretty. It was beautiful but almost full of sorrow. For every yellow there was a grey. For every red there was a black. For every bright green there was a dead brown color.

A forlorn umbrella laid aside a trashcan broken from what I can only assume was from the rain the other day. It was a dreary day not unlike the many others in mid November. Rain drops started to fall one after another, gaining speed until it started to full on pour. The only soul left out was a figure in black pushing a stroller frantically towards a building. It didn’t seem like classic New York. It was calmer, quieter… softer. 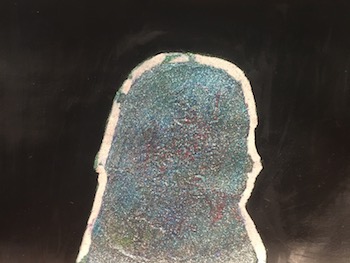 One day I will be nothing more than a scrap of plastic, a tarnished thing of the past. My corners will be curves and I will be as dull as a bad book. But before I go, I will make sure everyone remembers how I shone, brighter than a sky full of stars.

My Building by Ashley 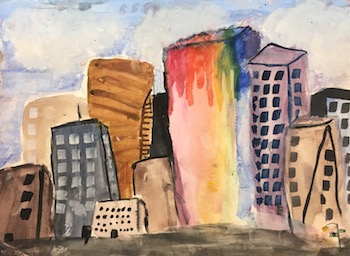 One in a crowd of many, I am like a tall New York City building. A building whose architecture was built on simplicity. A building whose beams support it’s self, and others near. A building whose windows are all its eye in the sky, allowing observation and thought. From below we can see it, such bold structures, yet they stand unnoticed and camouflaged. The building is anchored to the ground, not able to move and too stubborn to be knocked over. The beams are my close friends and family. They hold me together, support me, and make me whole. The building that stands there is watching unsuspecting pedestrians go on with their life, with a purpose.  One day my world will crumble, and the building, my building, will get knocked down with it. I will be torn off my foundation. I will be alone, no one to put me together. But they can see me now, for I am different. The hidden has been revealed. All I can do is wait. Wait for that same building to be rebuilt, recreated, yet I won’t be that same building. I will change for better or worse. The walls that used to protect me from the outside world were gone. They block out the hate and suffering in other words, now without I stand vulnerable and unprotected.  But as long as i remember myself, I’ll always see the building inside of me.

Manhattan Is Magical by Alexander 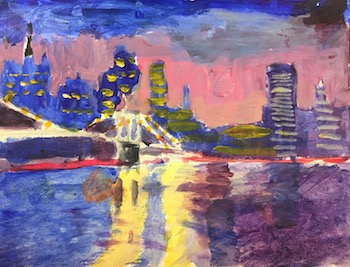 It is always awake. 24 hours, 7 days a week. Different parts of New York seem like different worlds. In the west village you have a lot of artists. If you go to Time Square you feel like a U.F.O. is hitting you with lights and it’s going to suck you in. Soho is full of tourists all the time. It gets on your nerves because they take up the whole sidewalk. New Yorkers just want to get to their destination quickly and as efficiently as possible. New Yorkers think the city is just another part of their identity. It's like when you get a new car you are so excited but then after a year or so you don't even notice it as a special thing, It's a part of you. BEEP BEEP!!!!! That's all you hear in New York City.  You see a wall of cars making you wonder when to cross the busy streets. You feel gasoline flying onto your face especially on busy streets. New York is never sleeping even you are. 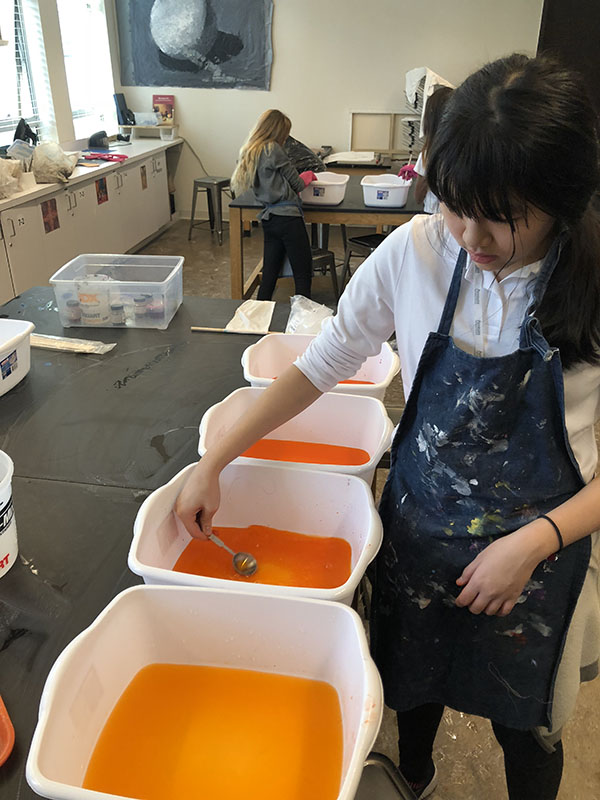 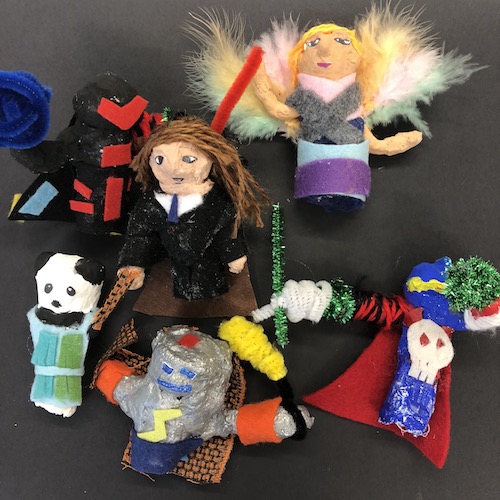 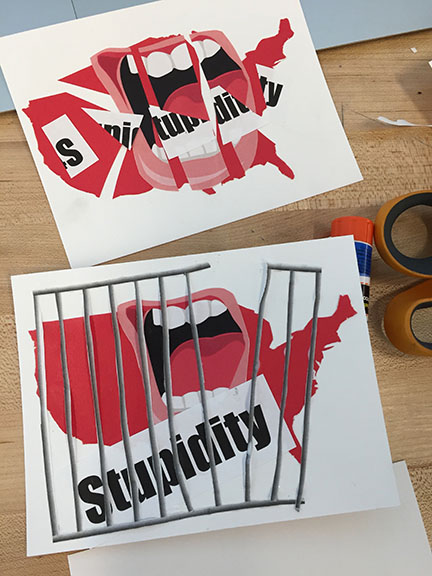